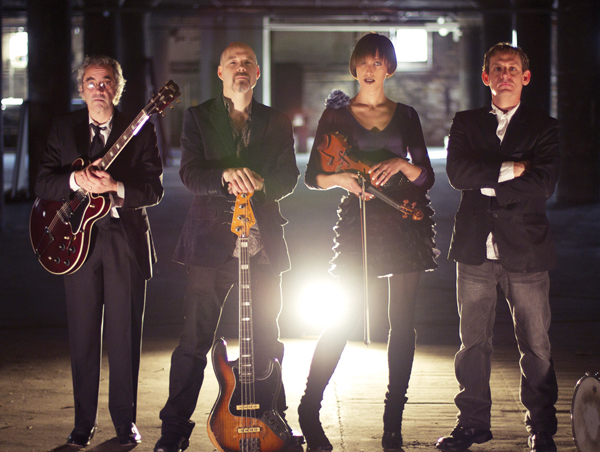 The Galactic Cowboy Orchestra will perform in Austin on Friday, May 6 at the Paramount Theatre starting at 7 p.m. - Photo provided

With a name like the Galactic Cowboy Orchestra, you’d come to expect an eclectic experience.

Their multimedia shows have taken them across the Midwest in the two and a half years they’ve been together, along with a recent East Coast tour where they hope to expand their fan base. In short, the GCO is living out a rock fantasy.

“Believe me, when we started this band … I had no idea we were going to be making little mini epic films,” said John Wright, the group’s bass player. “I didn’t see that coming.”

Wright, guitarist Dan Neale and drummer Mark O’Day had played together before, in a Grand Ole Opry-style band called Memphis in the Meantimes. During a sound check at one of their performances, the three started an improvisational jam session on stage, letting whatever they had, flow through them out into the music hall.

Wright called Neale and O’Day up afterwards to see if they wanted to form their own side project.

“I had been involved with instrumental fusion projects in the past, and I decided I wanted to do it again,” Wright said.

It wasn’t long before they found the fourth member in Wright’s wife, Elisa, a Blooming Prairie native. John would bring home tapes of GCO sessions and Elisa would constantly ask to practice with them. John didn’t think Elisa would fit at first, and told her the band’s sound was too complicated.

“My wife wanted to do it, and she had had no previous experience with improvisational jazz and rock,” John said. “I said, ‘Well this is just too much for you.’”

He was soon proved wrong, as Elisa impressed everyone with her violin skills, honed from years of practice. John’s “ignorance and lack of foresight,” as he puts it, was soon forgotten and the band started making music.

From Frisbees to CDs to short films, the band’s eclectic streak grew into a small-scale musical production. There’s an almost Celtic sound to Elisa’s fiddling, which often takes up country and bluegrass melodies accompanied by guitar and bass blends, with the percussion beats tying it together.

Taken as a whole, this music sparks a jazzy country sound only found in some of the most clever interpretations of Americana.

“One person will bring in an almost finished song and the other players will change it up and add some sections, bringing in their own influences,” Elisa said.

They soon started incorporating small films and wild photography into their shows, courtesy of Elisa’s childhood friend and fellow Blooming Prairie native Zach Nichols, a visual artist who’s directed several videos and photoshoots featuring the band. It’s his technical prowess and equipment that allows the band to use video between their songs, acting as a transition from one song to another. The films don’t necessarily tie into the music, but they’re an interesting look into what influences the band.

“We made the films because we wanted to and we thought it was funny,” Elisa said. “Audiences are really enjoying it. You’re not going to see it at your normal theater show necessarily.”

The GCO are among the few small groups to use multimedia in their shows, which is normally a staple of arena bands and rock groups. Elisa and the other GCO members recently saw Rush at the Minnesota State Fair, which recently decided to do some small film work of their own. Elisa, a huge Rush fan, was excited to see Rush doing short films but was disappointed when she thought that people would think GCO was copying Rush.

“We actually were talking about making a film before I realized that Rush actually would act in their own short films,” Elisa said, laughing.

The GCO are descending on Austin from their Minneapolis headquarters to play at 7:30 p.m. Friday, May 6 at the Paramount Theatre. Tickets are $12 for adults and $7 for children.

While each member has plenty of side gigs, including teaching and other music groups, each member is dedicated to seeing the band progress in the music world, expanding their audience base and hopefully pushing a boundary or two.

Books on a moral life