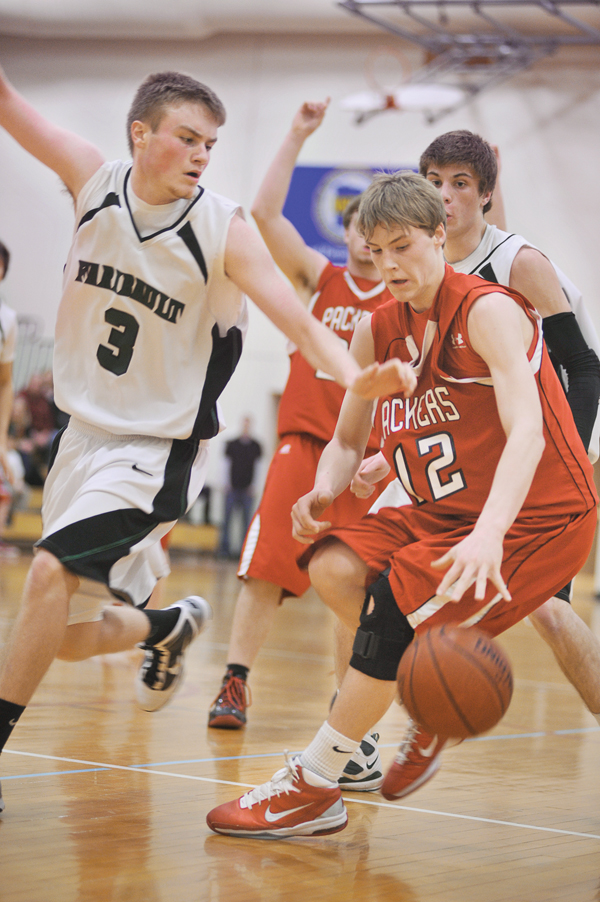 Austin's Zach Wessels pulls up on Faribault's Jordan Bardal after driving in the first half Wednesday night during the first round of the Section 1AAA tournament in Packer Gym. - Eric Johnson/photodesk@austindailyherald.com

Austin freshman Zach Wessels has grown up quite a bit over this past season, but he showed the maturity of a senior while helping his team beat Faribault 55-48 in the first round of the Section 1AAA boys basketball tournament in Packer Gym Wednesday.

After the No. 4 seeded Packers (14-11 overall) trailed for most of the second half, Wessels hit an acrobatic runner that drew a foul and he hit the following three free throw to put Austin up for good at 47-45 with 1:06 left in the game. 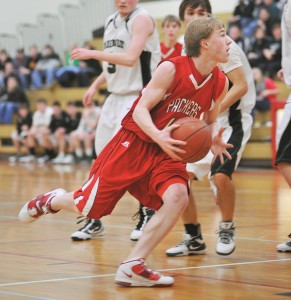 Austin's Jay Ettinger drives to the hoop during the second half of their Section 1AAA first-round game Wednesday night in Packer Gym. - Eric Johnson/photodesk@austindailyherald.com

“I just like to be where I can score and Joe (Aase) saw me,” Wessels, who scored nine of his 11 points in the second half, said. “It really gave us a boost and the crowd got pretty loud. That was a big turning point.”

Wessels’ score came off a steal from senior Jay Ettinger on the baseline. Ettinger jumped the play and ignited Austin.

“I always look for the those types of plays at the ends of games,” he said. “The other players’ minds are going so fast that they miss the small details and I try to capitalize.”

Ettinger went on to help ice the game for Austin as he scored six points in the last 32 seconds. He hit a pair of free throws to make it 49-45, and he scored on a deep pass for a lay-up, was fouled and tipped in his own missed free throw to make it 53-48 with 13 seconds left.

“It was a frustrating game for me up until the last six minutes,” Ettinger said. “I couldn’t get any shots to go and I didn’t have the confidence in myself. At the end I saw my season flash before me eyes and we had to step it up. The only play I kind of questioned was the tip-in, but they had an explosive offense and we needed to put them away.”

That explosive offense came from Faribault senior Michael Emge who poured in 39 points. The only other player to score for the No. 5 seeded Falcons (6-21 overall) was Chad Hansen, who had nine points.

“He was feeling it and it was incredible,” Ettinger said of Emge. “I give him all the props in the world. He was knocking down shots that I couldn’t believe.” 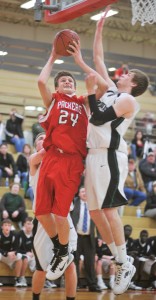 Austin's Tom Aase goes up against Faribault's Michael Emge in the first round of the Section 1AAA tournament Wednesday night in Packer Gym. - Eric Johnson/photodesk@austindailyherald.com

“I was getting frustrated and we just couldn’t seem to get anything going offensively and we needed someone to make a play,” Austin head coach Kris Fadness said. “We won and that’s the bottom line.”

Faribault had the ball with that five-point lead and that’s when Wessels came up with a steal and hit two free throws to turn the tide a little. Tom Aase hit six straight free throws to pull Austin within 45-44 with 2:14 left.

“We shot way too many threes (in the first half), and we had to go inside,” Wessels said. “We did that in the second half and Joe and Tom came up big.”

Faribault missed two front ends of one-and-ones in the last two minutes to give Austin the boost it needed.