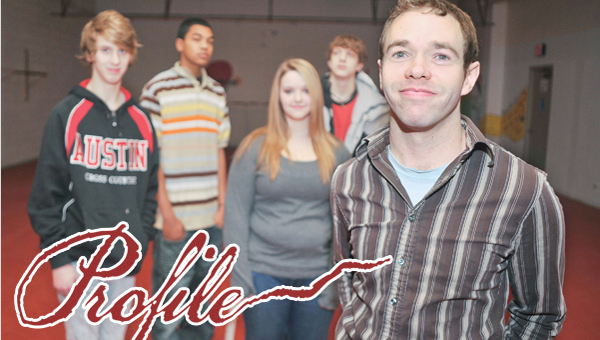 David Jordan runs Youth for Jesus in the Austin area and meets with those Austin students who want to attend before school on Fridays. -- Eric Johnson/photodesk@austindailyherald.com

David Jordon didn’t always have a passion to teach others about Christianity. Ironically, that’s what makes his current role so fitting.

Jordon was a student at Austin High School when he first became a Christian, marking the start of a journey that would eventually take him back to the place where it all began: AHS.

Jordon is the Austin director of Youth for Christ, a national organization aimed at providing support for Christian youth in public high schools.

After High School, Jordon became active as a leader in his youth group at Cornerstone Church. From there, he went on to attend two years of discipleship training in Florida and eventually led mission trips to Belgium and England. From there, it was off to Scotland, where he worked on church building and led mission-related trips.

When he returned to Minnesota in 2007, he started working part time at The Rock in Albert Lea, a Youth for Christ site. When a full-time position opened up in the Austin area, he jumped at the chance.

Rather than working out of a building, Jordon spends most of his time in the high school, where he meets with students before school and during lunch. He also has a presence at Riverland Community College, where he helps out with Righteous Invasion Of Truth (RIOT), a Christian student life group on campus that meets during lunch every Wednesday.

Jordon said the group is, more than anything, a place for students with common ground to come together for accountability and friendship.

Jordon also likes to mingle with those who were not brought up in a Christian household, as he knows it’s sometimes difficult to deal with the pressures of the teenage years. He wants to see students who are lonely come together to find joy in others.

“I don’t want any kids to go through those feelings,” he said.