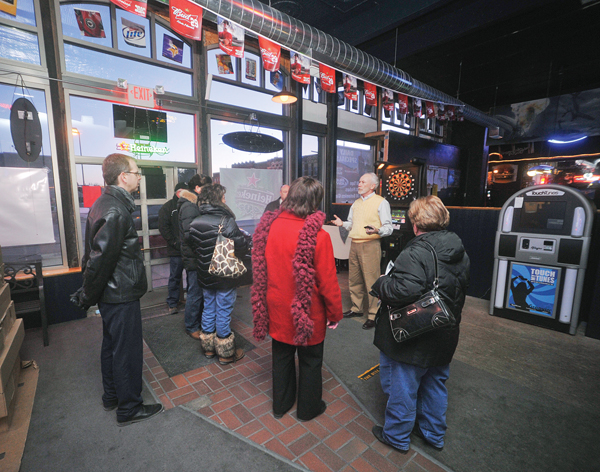 Pat Bradley, who owns the buildings that include The Bakery, Mickey's Bar, First National Bank building and Philomathian, talks to visitors taking part in the Main Street open house Wednesday night about improvements done to the front of Mickey's. - Eric Johnson/photodesk@austindailyherald.com

If you haven’t been to Austin since 2005, you’ll likely notice quite a few changes to the downtown area.

Over the past six years, Austin has taken on a project aimed at breathing new life into the historic downtown area. And according to facts and figures relating to renovations and new business, it seems to be working. 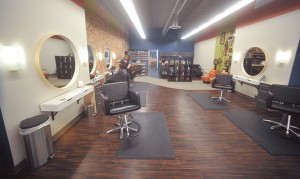 The inside of the Style Lounge, reworked from the days when it was Marty's Hobby. The Style Lounge was one of the businesses open Wednesday night during the Main Street open house. - Eric Johnson/photodesk@austindailyherald.com

In total, $5.2 million has been spent on downtown improvements which have included more than 30 storefront renovations, and more than a dozen new, relocated and expanded businesses. The Hormel Foundation and outside grants have poured in $959,000 to help get the renovation project off the ground.

Earlier this week, business that had been renovated open their doors to highlight the improvements that had been made. Recent projects have stretched along Main Street, from the old site of Marty’s Hobbycraft, now the Style Lounge Salon, to the remodeled former First National Bank building.

While some new businesses have moved into the area, including the Style Lounge Salon, the renovations have offered some sites a chance to upgrade their look.

That’s the case for the Philomathian, a business that moved across the street to its current renovated location next to the former bank building. It’s new site offers its customers two entrances — one through the front and one through the back lobby, which the business shares with Mickey’s Bar, the Bakery Bar and apartments above the businesses.

Much of the renovations surrounding the former bank building have been the brainchild of Twin Cities Attorney Patrick Bradley, who purchased the bank building, along with the four surrounding business buildings in the hopes of creating a more vibrant downtown.

While much work has already been done, Main Street Project Sarah Douty said there’s no end in sight.

“I think this project is ongoing,” she said. “You will definitely see it continuing.”

Stay active in an effort to fight dementia