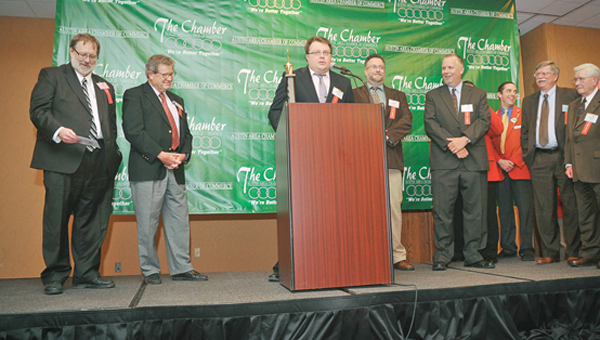 The face of business in Austin has taken on a new identity.

After a year of carrying the title of Business of the Year, Apollo Liquor and Superette’s Dave Olson handed over the title to a law firm deeply rooted in the Austin community.

As Marty Helle accepted the award on behalf of Hoversten, Johnson, Beckmann and Hovey, LLP, he was pleasantly surprised with the recognition.

“Because there are two sides to every case, a lot of people think we’re a bunch of jerks,” he joked.

On a more serious note, Helle said the work the firm does could not be accomplished without the 18 employees — all of whom play a critical role in the customer service and general operations of the firm.

“We are here to support people,” Helle said.

The award is given on behalf of the Chamber based on a number of factors, including Chamber and community involvement, as well as customer service. The law firm’s community activities range from the Austin Main Street Project to the Mower County Red Cross — and everything in between.

Founded in the 1940s, the firm has continued to grow and has become known around the nation for its outstanding reputation, including its participation in the Iowa State Bar Review School.

While the big award went to a business with deep traditions in the community, the Chamber also recognized a rising organization that has proven its success has had a positive impact on the entire business climate. The Austin Bruins, owned by Craig Patrick, received the New Business of the Year award.

For projects, McDonalds and Courtesy Corporation were recognized for the construction and revitalization of the Oakland Avenue McDonalds site.

In the lead-up to the highly anticipated business awards, chamber ambassadors took time out to recognize individuals who go above and beyond the call of duty.

Rich Fischer of the Brown Agency was the recipient of the Volunteer of the Year award. Having 25 years on the chamber’s Agriculture Committee, Fischer has been known as a reliable Chamber member.

The Human Resources Award of Excellence was given to a Riverland employee who has provided services to the Chamber over the years. Celeste Roble, Riverland vice president of employee and public relations and human resources, will carry the title through the year.

Ambassador 2010 president Eric Connett handed over his crown to Jeanine Nolson, who will now take the reigns. Sharon Kaplan, long-time ambassador, was also recognized for her efforts with the Ambassador of the Year award.

Aside from awards and recognitions, Chamber Executive Director Sandy Forstner touched on the role the organization has played in the success of area businesses. When the Buy Mower, Grow Mower campaign kicked off in the summer of 2008, the community began to focus more on what it means to support local businesses. Forstner said annual retail spent in Austin has increased by $50 million since the launch of the campaign.

“Buy Mower is keeping dollars in our community,” Forstner said.

Forstner also encouraged community members to hop on the Google bandwagon and support Austin’s efforts to have the company install high speed fiber in the city. That, he said, would create an outstanding climate for current and future businesses.