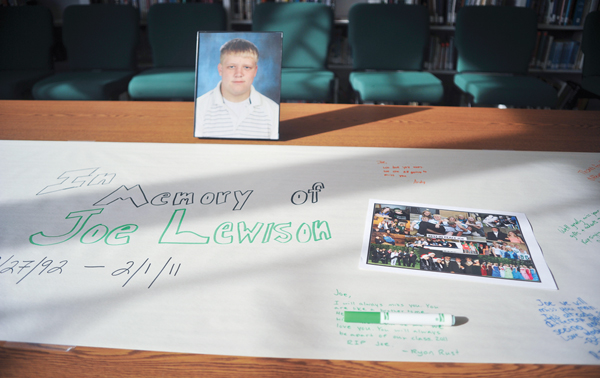 Notes and signatures adorn a memorial to Joe Lewison in the Pacelli library Wednesday morning. Lewison died Tuesday when his truck collided with a train south of Austin. -- Eric Johnson/photodesk@austindailyherald.com

People packed St. Augustine Catholic Church Wednesday morning. They gathered to mourn, to cry, to remember the life of a lovable high school senior who made people laugh, who was kind and loyal, and who will be remembered in the weeks and months to come.

Joseph Jon Lewison, 18, died Tuesday morning when his truck collided with a train just off Highway 218 near County Road 4. Lewison was a student at Pacelli Catholic Schools and had recently been accepted to the University of Wisconsin-Platteville. A memorial service was held for him Wednesday.

“I woke up this morning, like you all, thinking this was just a normal day,” Pacelli Principal Mary Holtorf said during the service. “And then I remembered this is not a normal day. Joe is gone. And it will be some time before we all have a normal day.”

Lewison was the second of Jon and Mary Lewison’s six children. A constant prankster, Joe is remembered by friends and family as someone who always had a little smirk on his face and had a quip for anything. He liked to joke around and tease people, but he always meant well.

“There wasn’t a mean bone in his body,” said Camden Hurd, a friend of Joe’s and a senior at Southland High School. “He wouldn’t hurt anybody.”

Joe was big and athletic, playing football and baseball for Lyle/Pacelli throughout high school. He transferred from Southland Public Schools to Pacelli before his sophomore year, but he proved to be a leader wherever he went, as he was a homecoming royalty candidate this year. Several students and faculty described him as “the kind of kid you look up to.”

“He was such a wonderful kid,” said Mary, his mother. “He always made you laugh. Always. He never took anything seriously. … He found a way to make everybody OK.”

Friends remember how confident and easygoing Joe was. They told stories after the memorial about him, like the time he randomly stopped at a friend’s house and just walked through the door, saying, “hey, I saw a whole bunch of cars outside so I thought I’d drop by.” Or the time he started a small food fight after throwing carrots at a couple of girls. They tossed an orange at him, which landed in his beans, splattering all over his jersey. It’s stories about the small pranks Joe pulled that his fellow classmates remember.

“It was all in good fun,” said Amanda Gobin, a senior at Southland. “He just always had a sense of humor.”

Many remember Joe for how loyal and generous he was. If Joe got a call in the middle of the night from a friend stuck in the ditch, he’d get up and help out, according to Mary. His nickname among his peers was “Joeybear,” for how kind he was despite his size.

“He was a big guy, but he just had a soft side to him,” said Sarah Nelson, a senior at Southland. “He was just a big teddy bear.”

Lindsey Chapek, a senior at Pacelli, knew Joe very well. The two dated since August of 2009. She remembers Joe’s love of snowmobiling, sports and chocolate milk. Throughout the service she carried a stuffed teddy bear holding a picture of her and Joe at a Minnesota Vikings football game last year against the San Francisco 49ers. The Vikings pulled out a last-second win that game. It was on Joe’s birthday.

“He was the strongest guy I ever met,” Chapek said. “I feel like I’m broken. I just lost my best friend.”

Joe loved agriculture and wanted to work in the farming industry, according to Mary. He planned on majoring in Agricultural Engineering at the U of W-Platteville, hoping to work as a farmer or perhaps building tractors bigger and better. He had been accepted at the university and had already received his dorm room assignment.

“Joe was always the kind of kid that had to figure out how things worked,” Mary said. 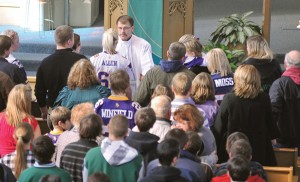 Pacelli staff, local clergy and a crisis team were on hand Wednesday to help Pacelli students, staff and family cope with Joe’s death. Students and friends can write about Joe on a tribute banner located in Pacelli’s library as well. A Facebook page in remembrance of Joe is up, with more than 800 people joining and dozens of comments.

“I felt comforted knowing how many people loved him,” Mary said.

A funeral mass will be held Monday, Feb. 7 at 11 a.m. at St. Augustine. It will take weeks, months, perhaps years for Joe’s friends and family to stop grieving. Yet those who loved him will remember little details about Joe, from his crooked half-smile to how he was always late for everything, to how much he liked chocolate milk.

“That boy loved chocolate milk,” Mary said, with a slight smile and a chuckle. “From the time he was drinking a bottle, his first words were ‘chocolate milk?’ Just yesterday he was walking around with a quart of chocolate milk, drinking it out of the jug. That was Joe. He was my chocolate milk kid.”