Sheriff: Illegal immigration process is out of our hands

Amazi said because immigration laws are under federal jurisdiction and are not handled by state and local authorities, she and her deputies, along with the Austin Police Department, are unable to investigate potential illegal immigrants. This means local authorities are powerless when it comes to conducting raids on Hormel Foods Corp., Quality Pork Processors, Inc. and other businesses where undocumented workers are frequently discovered, she said.

“When people think you can (do a raid) and you can’t, it’s very frustrating,” Amazi said.

“We’ve sat down with Immigrations and Customs Enforcement (ICE) and they’ve said, ‘We won’t do a raid. Period,’” she added. 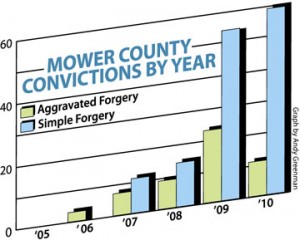 In fact, the local police and sheriff’s departments are not the only local agencies that have no control over illegal immigration — the Mower County Court system is also unable to enforce federal immigration laws, meaning Mower County judges do not have the power to deport anyone, regardless of the circumstances.

When someone is charged with aggravated forgery or simple forgery, they won’t necessarily be deported after they are sentenced. Aggravated and simple forgery charges, loosely defined, are the act of falsely making, altering or using documents for the purpose of identification; hence why many people convicted of forgery are also found to be residing in the country illegally and using forged documents as identification.

Clinefelter said the federal government becomes involved with a case once a person is in local custody and the circumstances suggest they are not a U.S. citizen. At that point, ICE is able to put a hold on the person.

“There’s no set criteria that I’m able to put my finger on,” she said. “It’s selective. There’s certain people they’ll take and some they won’t.”

ICE spokesman Shawn Neudauer said the agency tries to look into any case where it learns that someone who is in custody may be in the country illegally. “As our resources permit, ICE places detainers on deportable aliens who are in jails based on their arrests on criminal charges or convictions,” he said.

Neudauer said ICE is only notified of a potential illegal immigrant after he or she is arrested and booked for a crime.

If ICE chooses to place a hold on someone, that person will be transferred to federal custody for investigation either after they post bail or after they are sentenced. An individual who has been convicted of a crime and who is in the country illegally can be deported almost immediately, consistent with the Immigration and Nationality Act of 1996, Neudauer said. Additionally, federal immigration judges can, after due process, order the deportation of an illegal alien whether or not that person has been charged with or convicted of committing another crime.

Once a person’s case is seen in federal immigration court, he or she can appeal the decision up the chain of courts. Neudauer said some individuals could end up staying in the country for years while appealing their case; however, this is not the usual circumstance.

Clinefelter said illegal immigration is a civil matter, while forgery is a criminal matter. When Mower County judges sentence a person on forgery charges, they have to be sentenced based on Minnesota Sentencing Guidelines, Clinefelter said.

“At sentencing, the judge will sentence to the probationary period, which the judge cannot deviate from under Minnesota law — 10 years for aggravated forgery or three years for simple forgery,” Clinefelter said in an e-mail. “The probation is unsupervised if the subject is removed (deported) and the only conditions are do not illegally re-enter the country and submit to a DNA sample.”

Since most people placed on ICE holds and investigated after their criminal convictions are deported in a swift manner, Clinefelter said the taxpayers are no longer paying to house defendants or supervise them on probation.

Amazi said the deportation system would work more smoothly if ICE had more manpower or if the system was reformed altogether.

“(ICE) is doing the best they can,” she said. “Their gloves need to be taken off, and until you have a federal administration that let’s that happen, we will continue to have these issues.”

“This whole system is broken,” she added. “It’s just frustrating.”

Editor’s Note: This story has been updated to include new information.