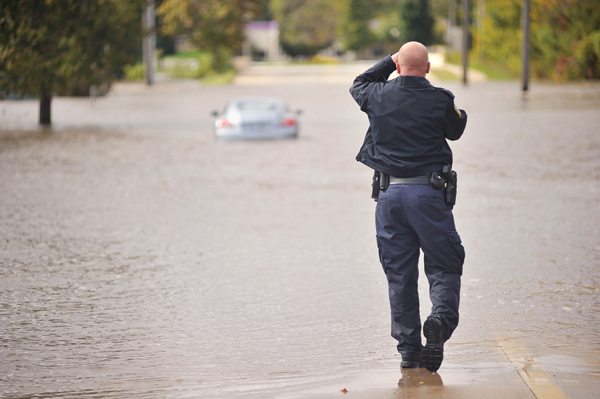 An Austin police officer takes a photo of flooding in September. The flood of Sept. 23-24 ranked as the top story of the year. -- Eric Johnson/Austin Daily Herald

Austin residents have seen their fair share of flood disasters over the years. When the Cedar River and Turtle Creek rose above their banks due to a massive rain storm between Sept. 23-24, many breathed a sigh of relief as a majority of businesses and homes experienced little to no damage. Others weren’t so lucky, as several Oakland Avenue E. businesses were flooded out and residents of Fair Oaks Apartments were forced to find shelter after extensive flood damage.

Total damage estimates in Austin topped $250,000, but the city was by and large spared from the disasters other southern Minnesota towns experienced. The city recently was awarded a $3 million grant from the Department of Natural Resources to fund further flood mitigation efforts and projects. The Cedar River Watershed District received a $335,000 grant to help clean up the Mississippi and Cedar Rivers as well. 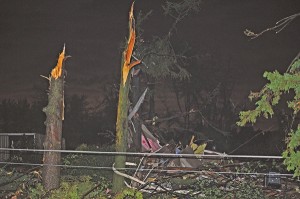 While Austin was not directly hit by the tornadoes in the summer of 2010, Austin residents didn’t escape from the panic and aftermath that followed the touchdown of a tornado east of town on Thursday, June 17.

The storm, which occurred just one year after a tornado whipped through Austin, largely hit communities on the outskirts of Austin. But with ideal conditions for tornadoes that day, Austin residents were aware that the tornado could switch and head toward the city at any time.

The tornado hit Hollandale and Blooming Prairie, leaving homes and buildings severely damaged in its wake. In Albert Lea, one person died as a result of the tornado, while 15 people were injured.

The tornadoes in southern Minnesota gained state-wide attention as Minnesota mourned the destruction of several devastating tornadoes that occurred that day, including the tornado in Wadena that devastated a whole city.

The tornado contributed to the state’s ranking in 2010 as having experienced the most tornadoes in the nation.

An often tense and pointed campaign for sheriff ended with Terese Amazi winning her re-election against challenged Sgt. Jeff Ellis.

During the campaign, Ellis repeatedly criticized Amazi’s ability to communicate with the leaders and employees in the Mower County Sheriff’s Office. The sheriff ensured she had maintained an open door policy within her department.

Ellis also stated an illegal immigration procedure that he and another deputy drafted was overlooked by the sheriff. County Attorney Kristen Nelsen submitted a letter to the Herald stating the policy “would go above and beyond what is permissible under Minnesota law and under the United States Constitution.”

While Amazi retained her role as sheriff, the election brought many new faces to public office.

Mark Dayton held on during a recount to defeat Republican Tom Emmer, becoming the first Democratic governor since 1991. 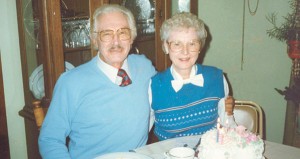 Everybody remembers Loren Krueger as a nice man, frugal with his money, who always stopped to talk to people he passed by. When the LeRoy native passed away in March of 2009, he left behind almost $3 million in assets to five LeRoy churches, the LeRoy Senior Center and the LeRoy Fire Department. Each organization got hundreds of thousands of dollars, which they used to make repairs, donate to other LeRoy groups or give to charitable organizations in the area.

News travels fast, as Krueger’s good deeds were covered by other local media groups after the Herald story was published, ended up in the national spotlight as NBC Nightly News, “The Today Show” and CNN were among media outlets to share Krueger’s story. 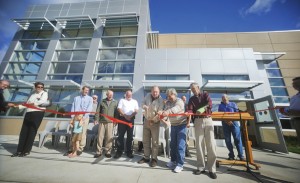 Mower County closed the book on its largest — and potentially most controversial — construction project.

After about 16 months of construction, the $28 million Mower County Jail and Justice Center was completed and opened to tours on Sept. 11 and 13.

“This was the largest undertaking Mower County has ever done, and we’re coming in on time and on budget,” said County Board Chairman Ray Tucker in September. “It should be a real good service to the people of Mower County.”

In mid-September, the courts and the offices for court administration, the county attorney and correctional services moved to the new justice center.

The jail followed a few months later with inmates moving to the new jail on Dec. 27.

The move came after years of debate about whether a new jail was needed and whether the facility should be located downtown or near the airport.