The Austin gymnastics team is looking to pick up a new habit, one that will see them competing against the best teams in the state on an annual basis.

The Packers will start that habit this Saturday at 11:45 a.m. when it competes in the Class ‘A’ ‘true team’ state meet at Becker High School.

Austin head coach Mark Raymond said he hopes this weekend motivates his squad to try to get to ‘true team’ every year. Austin has five gymnasts that are freshmen or younger and six that are juniors or older, with one sophomore.

“Some of our older girls have been working for years to get to this point,” Raymond said. “For the (younger) girls, this is what they know and it will be an expectation from now on. For them, it won’t be a distant goal. They’ll understand where it is and be able to attack it a little earlier in the season. It’s a very big step for our program.”

Working as a team

It’s the first time in school history they’ve advanced to the meet and it comes from the result of hard work in practice and a team-first attitude.

“We have shown more team togetherness this year than in previous years,” said eighth grader Sela Fadness, who will compete in all four events on Saturday. “I think that’s helping our score a lot. You’re not going out there by yourself. You have everyone behind your back.”

Fadness and Sabrina Snater, a senior who will also compete in all four events Saturday, both advanced to the Class ‘A’ individual state tournament last season, and this time the whole team is going. While the Packers had just five gymnasts competing on their varsity team two years ago, they have eight varsity gymnasts this year as some athletes are able to specialize in certain events.

“It’s nice that we’re the only two all-arounders because we have a lot of specialists for events,” Sabrina Snater said. “It’s really cool to see how some girls can just excel far above the expectations of what they thought they were going to do.”

The Packers have gradually increased their score throughout this season. They were pleased to open the season with a 133.5 against Owatonna and they put up a season-high 138.425 Tuesday night against Mankato West.

Raymond is hoping his squad will reach the 140s in the near future.

“(Getting higher scores) drives us,” said freshman Abby Snater, who competes on the bars and beam. “Going up to a 138, doesn’t seem like much, but as a team it means a lot.”

“You do what you can do in your event and then you cheer for your teammates,” Jorgenson said.

Checking out the best

Needless to say, the Austin gymnasts will be taking mental notes.

“We’re excited and it’s something different and new,” Wehner said. “We’re kind of the newbies there, so we’ll be watching all of the other teams to see what they can do.”

Raymond likens the situation to the individual state meet and once Austin sees what the ‘true team’ meet is like, it will be that much better prepared to compete next season.

“When you’re in a room with teams which are that good, you’re hoping to throw out your best and see where you shake out,” Raymond said. “If we throw our absolute best and do like we should, we can go anywhere from fifth to tenth. Right now our goal is to get the experience and hopefully make (’getting to true team’) a habit.”

Besides being balanced with athletes, the Packers are balanced in age as well. The squad features two seventh graders, Caroline Hackel and Abby Bickler, who are in their first year on the varsity team.

The elder Packers have been welcoming to the youngsters as they’ll give them rides home and talk gymnastics.

Bickler, who will compete in the floor and beam on Saturday, has enjoyed her time with the varsity squad.

“It’s cool to be able to be with the high school team and to be able to workout with them is awesome,” she said. “Going to ‘true team will be a nice team bonding thing where we can cheer each other on and try our best.”

Hackel said being on varsity has made her take a more competitive approach to gymnastics.

“It pushes you because you really have to think ‘now I’m with the bigger girls and I can’t goof around. I have to work harder and push myself to be as good as them.’” she said. “When you see them do a new skill, you want to do it too and you want to be better than them.”

If the seventh graders master those new skills, the Packers could be heading back to ‘true team’ for years to come. 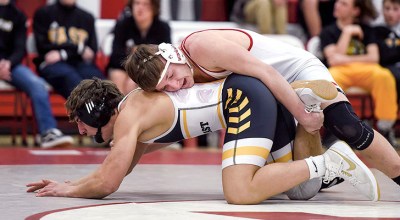