Richard E. Yonke, 64
Richard E. Yonke, 64, of Burnsville, Minn., died unexpectedly on March 24, surrounded by his loving family.
Richard graduated from Austin High School in 1963 and from the University of North Dakota in 1968 with a bachelor of science degree in electrical engineering. At UND, he was a key player on nationally-ranked football teams. After graduation, his 38-year career was spent entirely with one organization, where he retired from Seagate Technology as a director of design engineering. Throughout his career, he thrived on the challenges of developing new technology and enjoyed the camaraderie and friendships with his co-workers.
Richard was a wonderful husband, father, grandfather, son and brother. Despite his many personal accomplishments, he found his greatest joy in spending time with his family, especially at the cabin which he designed and built. He also took great pride in both coaching and attending his children’s many athletic events. His grandsons clearly loved spending so much time with him and he felt extremely fortunate to have developed such close relationships with them. Above all, he cherished the more than 40 years he was able to spend with his loving wife.
He is survived by his wife, Tudi; son, Bret (Emily); daughter, Lisa; grandchildren, Bradley and Blake; mother, Leone Yonke; sisters, Marilyn (Paul) Oxley and Marge (Joe) LaFrance; brother, Bob (Dottie) Yonke; sister-in-law, Ann Lien and many nieces, nephews and friends.
Richard was preceded in death by his son, Jeff, and his father, Emil. 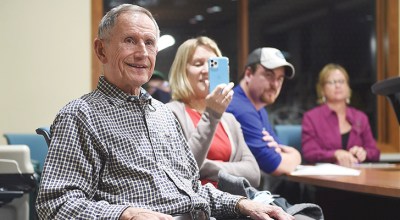 Our Opinion: Start a positive movement

Annie Lane: Letting go doesn’t mean you have to lose